You want a better dog? It's not going to be easy, but you can do it.

In the mid-nineteenth century, the British hunting classes were desperate (desperate, I say) to breed the perfect retriever. Previously, hunting dogs had either been pointers telling you where to shoot or chasers like deerhounds and borzois. But shooting birds was getting easier, and you really needed a soft-mouthed, good-swimming, highly tractable dog to go and fetch them. There were water spaniels and setters and so on, but the magic moment came in the arrival of the labrador, or Lesser Newfoundler. 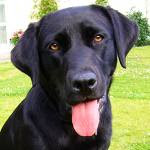 This had been bred in Newfoundland as a fisherman's helper on a more practical scale to the classic Newfoundland, which is the size of a bear and has webbed feet (great line from a poem I can't be bothered to go and find now: 'Who bred what with what to get a Newfie dog?').

As D Caroline Coile so rightly says in The Golden Retriever Handbook, 'The ingredients were all there. Now all that was needed was a master to combine them, the conditions under which to test them, the resources to refine them. And a lot of luck.'

Cometh the hour, cometh the brewery heir. Dudley Coutts Marjoribanks was a serious sportsman with an estate on the Tweed and a lot of great dogs, but the defining moment in his life (I do not think I exaggerate) came with the chance addition to his kennels of a golden-coated retriever owned by a cobbler.

(When I read this sentence, I sort of wondered if that cobbler's golden-coated retriever might have been the first golden retriever, which only goes to show how much I know. I mean, that cobbler didn't get created Baron Tweedmouth or have millions of pounds or anything.)

He bred this retriever to his tweed water spaniel, Belle (tweed water spaniels are now extinct), and she had four yellow puppies, Crocus, Cowslip, Primrose and Ada. Stupid names for dogs, I think. Cowslip bred with red setters and a tweed water spaniel (and anyone else who fancied having a go, as far as I can see), and these progeny bred amongst themselves. A bloodhound element was later introduced. I bet it was.

(I can't see any mention of labradors, but maybe that is where the original golden cobbler's dog comes in.)

These dogs were attractive and talented, which is half the story. They were owned by rich, famous sportsmen, and that's the other half. This really is a story about what success is like in life. Also, history fans, this mania for breeding is taking place around Darwin-time. If you think people like Darwin weren't influenced by it then you're nuts. And if you think that people didn't then start tinkering more post-Darwin, you're also nuts. Causality is the salmon that swims both ways in the stream.

Tweedmouth and his family sent dogs around the world, including Canada, with the Hon Archie Marjoribanks (sounds funny out loud) in 1881. 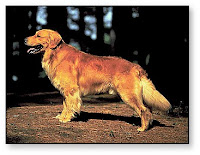 The Canadians didn't take the dog to their hearts immediately though, says Cindy Moore.

No, that wouldn't come for fifty years. The Kennel Club in Britain accepted the first goldens for registration in 1903, and a few brave souls in Canada messed around with them, but it was only in 1930 with Colonel Sam Magoffin's imported Speedwell Pluto that public interest was really aroused. The Canadians never looked back, and nor did anyone else. Probably the only reason I am going into this is to post this picture, and tell you the names of the dogs in it:

They are, from left to right, the (I think Canadian since it isn't specified) champions Rockhaven Lempi, Lassie, Harold, Amber, and Maihi, the American and Canadian champions Speedwell Pluto and Wilderness Tangerine, both imported from the UK. I bet you can buy clothes in 'wilderness tangerine.'

I could probably find out more about Col Magoffin, but I'm not going to.
Posted by Robert Hudson at 12:20

who is this guy? (if you really cared, you'd google me)